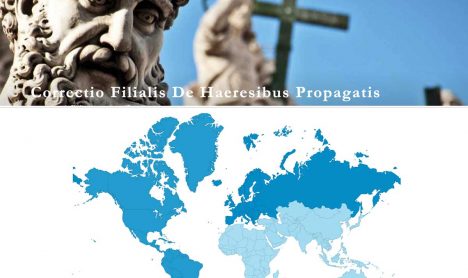 On September 25th, the day after the publication of the Correctio filialis to Pope Francis, Greg Burke, the spokesman for the Vatican Pressroom, with condescending irony, denied the news diffused by Ansa, which had reported that access to the site of the Correctio had been blocked by the Holy See: “Do you really think we would do this for a letter with 60 names?” The director of the Pressroom, who judges initiatives on the basis of the number of “followers” , might be interested to know that http://www.correctiofilialis.org, eight days after being put online, had more than 180 thousand individual visitors and 330 thousand page visits.

The visits come from 200 different countries of the five continents. Italy and the United States lead the number of accesses. Further, the letter of correction addressed to Pope Francis by 62 scholars, was shared on October 3rd, by 216 theologians, priests, professors and scholars of all nationalities, whose signatures are visible on the site. Added to these, there are thousands of adherents, who put their signature on the official site or on other Catholic sites which actively support the initiative: onepeterfive.com, lifesitenews.com, katholisches.Info. Guido Mocellin, in Avvenire of September 27th, had to admit that in “the ecclesial blogsphere” , thanks to a” modern website in six languages”, “the posts on the Correctio filiale directed to Pope Francis “as a result of the propagation of heresies” have been the most present over the past few days: they constituted 30% of all those that I was able to consult between Saturday 24th and Monday 26th of September.

If we want to stay with the numbers, the number of cardinals, bishops and theologians who have risen up against theCorrectio, in defence of Amoris laetitia, is irrelevant. Even the Cardinal closest to Pope Francis, the Secretary of State, Pietro Parolin, took a position of equidistance, declaring that “people who are not in agreement voice their dissent but these things have to be discussed, in an attempt to understand”.